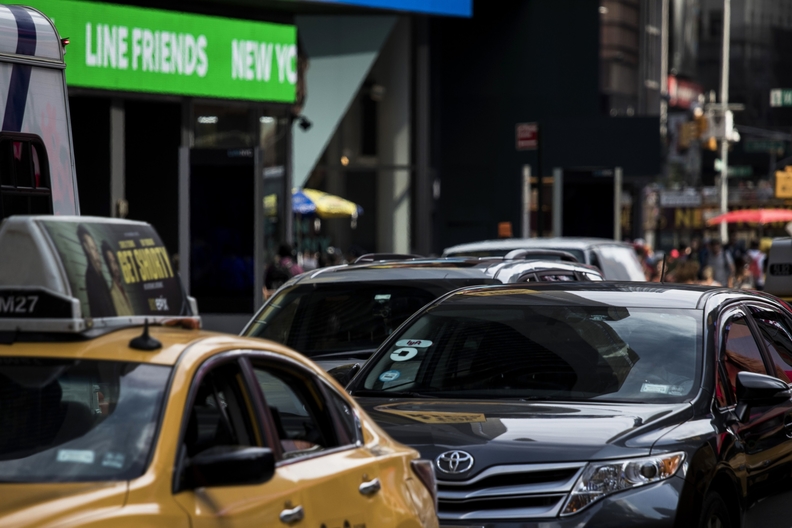 Uber may follow Lyft's lead by limiting when city drivers can access its app in response to new regulations.

An email the company sent to its drivers on Friday warns that there will be changes to the way drivers can use its app in New York City. The email comes two days after the Taxi and Limousine Commission approved rules that extend a cap on the number of ride-hail vehicles and limit how long drivers can cruise while looking for passengers.

"As a result of these new TLC regulations, we may need to make some changes to the Driver app that could affect how you drive with Uber in NYC," the email to drivers read.

The message doesn't clarify what those changes are. An Uber insider said the company is looking at a variety of options to increase the percentage of time its drivers have a passenger, known as the utilization rate. One of those options could include limiting driver access to the app, the person said.

The city's driver minimum wage, approved last year, measures how much of the time a driver cruises with an empty car. The more cruising a driver does, the more fare revenue the app-based company needs to share to ensure the driver makes at least $17 an hour after expenses. The additional rules approved this week require that Uber, as well as competitors such as Lyft and Juno, reduce the average portion of time their cars cruise without passengers to 31% by next August. The current average for the industry is 41%.

Lyft already has a policy limiting driver access, which it instituted at the end of June. Under the policy, Lyft drivers are blocked from using the company's app if they are cruising where few people are demanding rides. They instead have to either wait until demand picks up, or drive to a busier neighborhood, such as Midtown.

Uber said at the time Lyft's rule was announced that it could increase the number of drivers on Uber's app—driving down Uber's utilization rate.

Lyft’s rule has proven controversial among drivers, who complained at a July 23 TLC hearing that they were not able to get onto the app even after they drove to the areas they had been directed to. Lyft also makes an exception to its policy for drivers who lease their cars from Lyft’s Express Drive, a leasing service the company operates in partnership with rental operators such as Avis and Hertz.

Acting TLC head Bill Heinzen said this week that he took note of the concerns raised by drivers at the July 23 hearing, including those about the impact of the rules. Driver concerns included the higher costs that come with having to lease a licensed vehicle from a fleet operator, rather than use their own car, because of the cap on new vehicle licenses.

He said the TLC will be investigating that issue, along with the terms and conditions of the leases, and whether app companies are limiting the ability of drivers to earn a living.

Uber's promised in its message Friday to contact drivers "in the coming weeks when we have more information."

Heinzen explained the rationale for the city's new e-hail regulations before the vote on Aug. 7: “For too long the app companies’ calculated oversupply of vehicles in New York City has resulted not only in traffic congestion, but in lower income for drivers.”

Uber-This Is What You Do When Riders Input The Wrong Pickup Location
August 20, 2019